You might also want to see Extreme Points and Me if you’re reading this. Spoiler warning: I made it.

When my mate Ben said he was coming to town and suggested going for a walk, Wilsons Promontory was a pretty easy decision. We’d considered doing the Overland Track in Tasmania, but my budget was going to be stressed enough for a short expedition without having to travel interstate as well. Not only is it a great place to hike, but it contained my long-awaited goal, South Point. The weather forecast looked acceptable, so we locked it in. I needed some gear though.

For all the hiking I’ve done in the last couple of years, I still didn’t own an appropriate tent. I’d picked up a little pop-up job that’s pretty neat, but as it packs down to a large-ish circle, it’s really only good for drive-up camping. It’s very hard to strap it to a backpack, let alone put it in one. Nice tent, just not practical. 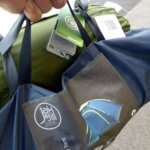 Free tent with every tent!

Fortunately, Ray’s Outdoors had a sale that week on the Falconet 1800 1-person hiking tent, and I went to pick one up. Due to a special promotion, my tent even came with a free tent! The free one was not anywhere near waterproof enough for me to gamble on using for this trip, but it might actually be OK for some light summer use if I want a bit more space than the 1-person job.

Being able to stretch out with my pack beside me would have made logistics a little easier when going through gear and repacking in the mornings, but the small one turned out just fine, and had its waterproofing thoroughly tested one night. No regrets! My little green home for the weekend

The first day was pretty uneventful, although we did set off a little later in the day than I’d imagined. My original thought was that we’d make camp at Roaring Meg by about 2pm, then I’d set off and do South Point that evening before coming back for dinner. We ended up getting there closer to 4:30pm, and although sunset wasn’t going to be for a while I decided to go out first thing in the morning instead. I spent some time looking longingly down the trail head that I’d walked away from several times in the past. The trail head to South Point at Roaring Meg campsite.

I set off at about 6am, with Ben opting for a bit of a sleep in due to a restless night. I started out with a multitude of layers of clothing as it was super cold after leaving my sleeping bag, but I quickly shed them and ended up coming home in just a t-shirt and shorts. Making camp and heading out from there was definitely the right decision and I’d recommend anyone else doing this consider the same. It was a piece of cake with just a light day pack and some water on me, but there were a couple of tricky points requiring squeezing between large-ish rocks and a couple of vaults over fallen trees that would have been really inconvenient with a full pack on.

The walk is given a one hour estimate each way on the park’s guides, but I think that’s pretty optimistic if you want to actually enjoy the walk. There are some spectacular places to stop and take in The Prom as you go. 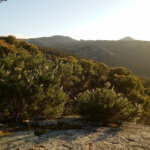 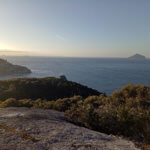 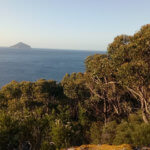 I really wish I’d stopped to take some more pictures along the way, as it takes you through a pretty wide variety of terrain, from damp and ferny creeks to sandy trails along high outlooks. The trail is really obvious at all times and you can’t help but think about the many thousands of feet that have stomped along these paths for a long, long time. Eventually it all gives way and you’re left facing a simple sign telling you that you’ve made it. Congratulations, you are south!

There was only one thing on my mind at this point, and that was my decision to have the most southerly breakfast on the Australian mainland that day. My very southerly bag of muesli.

Side note – I did these bags up as a test based on a post I read on some forum somewhere. Take a ziplock bag, add your muesli and powdered milk. These roll up and pack down really well and for breakfast you just pour some water in, smoosh it about a bit, and eat. It feels much most satisfying than cramming down muesli bars, and you can chuck some extra dried fruit or anything in there to taste. I used to take little packs of UHT milk around with me for coffee and breakfast, but I’m a powdered milk convert now. Much less waste and easier to fine-tune your quantities. The most southern I have ever personally been! I was thwarted from going further by a marked conservation area.

After a leisurely breakfast, I headed back to Roaring Meg. It was a pretty casual walk, again I took about an hour and a half on it to not knock myself out as we had a pretty serious amount of ground to cover that day. Our next campsite was Little Waterloo Bay, and we were going to stop at the lighthouse on the way for a lunchbreak and to replenish our water supply.

That section of the walk ended up with us being pretty miserable. We did make it but it took much longer than anticipated, and the last kilometer across an admittedly beautiful beach just felt too much of a chore to enjoy by that time of day. We should have done an overnight at the lighthouse, then Little Waterloo Bay fresh from there. I’ve stayed at the lighthouse a couple of times now, and it’s comparatively quite expensive compared to booking a campsite, but it’s really worth it. 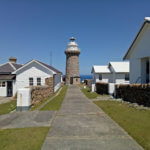 The weather here was as perfect as I’ve ever seen it. 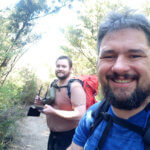 This is the point at which we decided we hated everything. 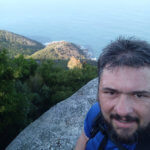 Made it to the top of a very high place! 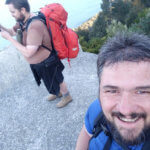 The sense of achievement still comes through even when exhausted.

Having done it once now, the feeling of urgency is gone and I’d like to do another point off the checklist first, but I’d love to go back again just for this point and to get some proper pictures along the way. Taking two nights at Roaring Meg, with a leisurely full day spent walking out to South Point for a picnic lunch and return would be a great little holiday, maybe including the lighthouse and back as well.